Why is this little hole such a big deal? 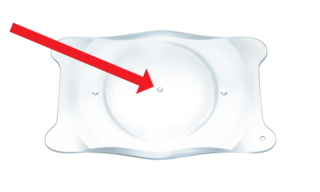 The little hole is only 360 microns (.36 mm) in diameter but it makes a world of difference for safety and visual quality.  The little hole is the small central port placed in the middle of an ICL (Implantable Collamer Lens) from STAAR Surgical.  This lens implant is called the EVO.  The small hole eliminates the need to make an opening in the colored part of the eye (the iris). During implantation of the original ICL, an opening in the colored part of the eye (known as an iridotomy/iridectomy) was needed to prevent a type of glaucoma.  Creating the opening during surgery in the iris could cause initial bleeding in some cases and, for some patients, could lead to visual distortions from the light passing through that opening.  With the EVO lens, this is no longer the case.

Over 1 million EVO lenses have been implanted outside the US prior to the recent FDA approval of the EVO lens in the US. An added feature is that it appears to be more physiologic having the fluid that is made behind the iris come through this middle hole instead of one made in the peripheral part of the iris.  This appears safer for both the cornea (the window of the eye) and the natural crystalline lens.  The development of cataracts is less likely to occur earlier than normal in eyes with EVO lenses based on what doctors tell me from outside the US.

We are excited to be one of the first practices offering the EVO Visian ICL in the US.  The EVO is easily removed later in life when cataracts naturally occur, and the EVO does not make changes to the corneal surface or increase the risk of dry eye symptoms.  It is a great breakthrough.

Price Vision Group is a global leader in corneal transplant, cataract surgery, keratoconus treatment, PRK and LASIK. At our center in Indianapolis, we see patients from Indiana cities including Zionsville, Fishers, Carmel, Noblesville, Avon, and Greenwood, as well as people who travel from across the U.S. and even abroad for treatment by our renowned physicians.